This means we need to accelerate our efforts at increasing building energy performance today. We need to ensure we construct each new building to the highest energy standards and building energy codes are one of the key tools that we can use to act swiftly and purposefully to avoid locking in long-term inefficiencies. Building energy codes, like the proposed 2020 national model codes, have the potential to ensure that every new building constructed is a long-term asset that delivers a host of benefits to both the occupants and community.

By starting provincial/territorial adoption efforts now, we can build the grassroots momentum needed to push provinces/territories to adopt the upper tiers of the proposed model codes and to advocate for amendments related to increased energy efficiency. In doing so, we can strengthen the energy performance requirements of building energy codes as they are adopted in each jurisdiction.

CHECK OUT THE TOOLKIT

Building energy codes are one of the near-term transformational actions local governments’ can use to achieve their climate change targets. Heating and cooling accounts for the largest proportion of energy use and emissions generated in Canadian buildings and building energy codes can help cut energy waste while delivering low-carbon buildings that improve the health, resilience, and livability of the community.

Climate advocates, municipal advocates, and local organizations can use the Codes4Climate toolkit to demonstrate the importance of advanced energy codes as a way to meet their community’s social, environmental and climate ambitions. 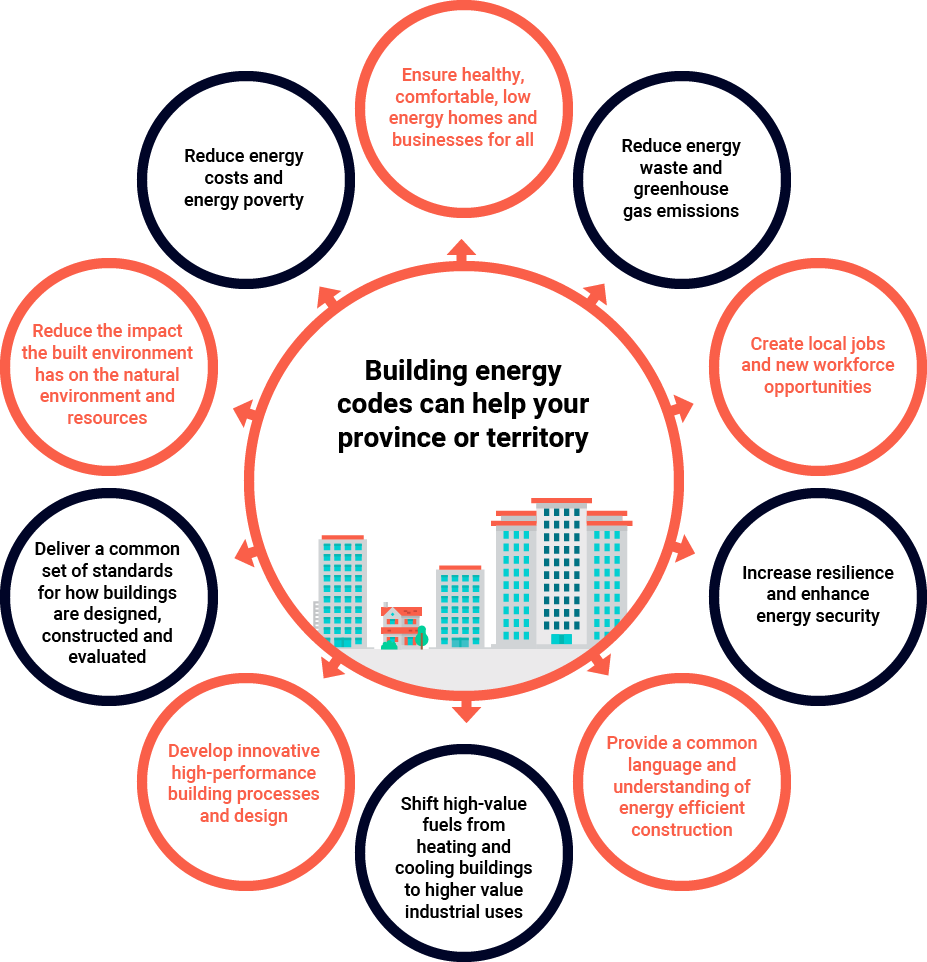 Codes4Climate can help building advocates in the following ways.

3. Connect buildings as a tool for climate action

The energy our buildings consume and emissions they produce are affecting our changing climate. A massive reduction in greenhouse gas emissions is needed to mitigate the future impacts and costs of an increase of this scale. The buildings sector has a large role to play in achieving these reductions.

Codes4Climate outlines the role of building energy performance as a tool for climate action and connects buildings to other municipal actions intending to draw down emissions.  Framed in this way, advocates can help their municipality better prepare for the adoption of the model codes in the coming years. For example, developing grassroots building energy code campaigns in each jurisdiction that includes municipal officials, municipal staff, climate activists and the buildings sector.

4. Build awareness about building energy codes and encourage others to get involved

Canada’s proposed 2020 model codes introduce tiered codes to each province and territory. This means provinces, territories must be prepared to ensure that their jurisdiction have the information and education, workforce training and compliance training needed to successfully implement the highest tier possible for their jurisdiction.

Advocates will play a key role in these preparations as they leverage their networks to position building codes as a primary tool in combating climate change. This eventually includes their participation in the model codes development system. This will help balance the interests of those seeking to maintain the status quo with those seeking to accelerate building performance.

Leverage the toolkit and get involved

Codes4Climate is a tool for advocates to learn more about Canada’s model codes, how model codes become adopted by their provinces or territories, and how to make the case for better building codes adoption.

Get involved in Efficiency Canada’s campaign for building code adoption and connect with your province or territory’s Action on Building Codes Council member. Together, we can accelerate the adoption of advanced building energy codes in Canada.

CHECK OUT THE TOOLKIT