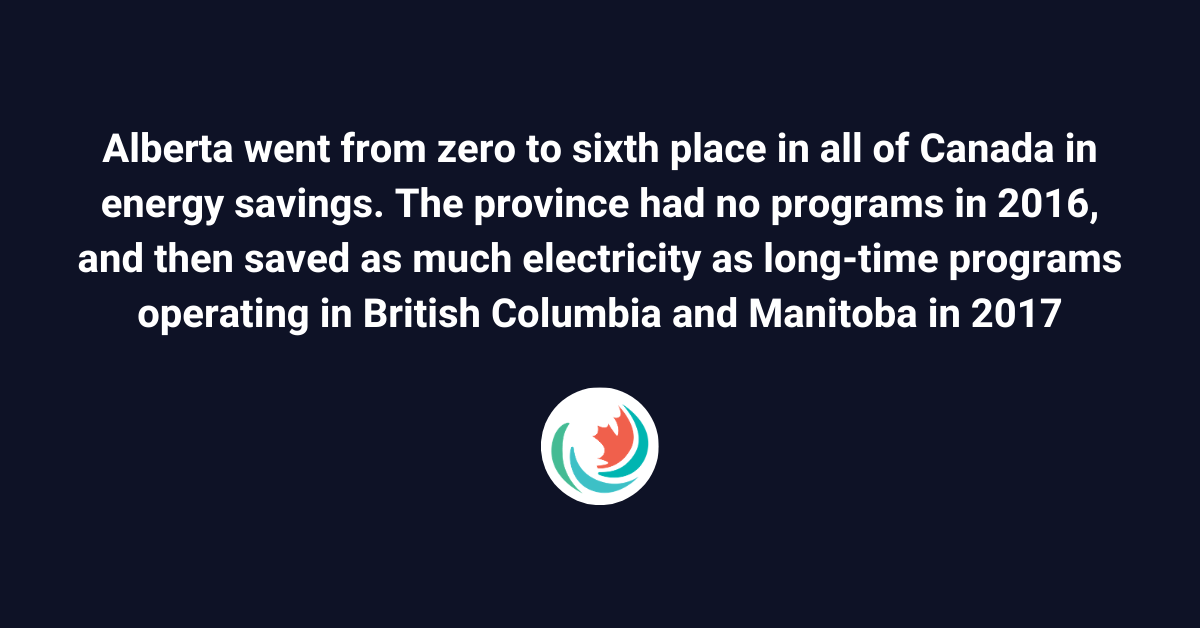 Alberta went from zero to sixth place in all of Canada in energy savings.

The province had no programs in 2016, and then saved as much electricity as long-time programs operating in British Columbia and Manitoba in 2017, according to an energy efficiency scorecard released recently that compares all the Canadian provinces.

The scorecard was released alongside a Canada-wide database on energy efficiency policy.

“Imagine thinking of all that energy waste from our homes, businesses and industry as a ‘resource’, just like natural gas, oil or wind turbines,” said Corey Diamond executive director of Efficiency Canada, an energy efficiency advocacy group.

“Now imagine harvesting that ‘resource’ in every community across Canada, creating jobs and meeting our climate change commitments.”

The scorecard creates a friendly competition among the provinces so the country can reach the potential that energy efficiency has to offer, Diamond added.

Alberta is ranked sixth, just behind Manitoba (fifth). B.C. is in the number one spot, followed by Ontario and Quebec.

Alberta is off to a good start but Haley says the abrupt closure of programs which damages consumer confidence and industry capacity creates uncertainty.

“If Alberta does not want to fund efficiency programs through a carbon tax, that is fine. Most jurisdictions integrate efficiency into electricity and natural gas systems because saving energy is cheaper than burning fuel and building transmission networks,” added Haley.

“As Alberta develops a new climate change strategy, energy efficiency is a way to keep energy affordable and manage the greenhouse gases emissions outside of those covered by recently announced industrial regulations,” said Haley.

Read the rest in the Red Deer Advocate.