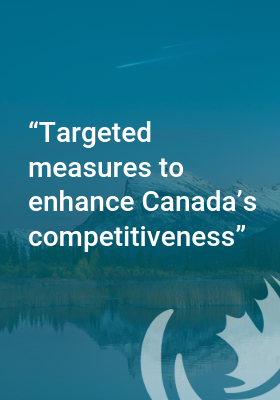 September 13, 2018   Brendan Haley Policy Director Efficiency Canada     The latest news suggests that Finance Minister Bill Morneau is seeking “targeted measures to enhance Canada’s competitiveness” in contrast to a policy of broad tax cuts.   One way to boost competitiveness and help prepare Canada for a low-carbon economy, is to boost energy efficiency . Energy efficiency is already a key part of the federal government’s climate change plan, but it often gets lost amidst the polarizing politics of carbon pricing. But efficiency is also key to building a more competitive and resilient economy, which is why Minister Morneau could bring efficiency to the front of his agenda.   Here’s why efficiency boosts competitiveness.   First, because helping our industries and buildings cut their energy waste increases their energy productivity. Spending less money on energy cushions businesses against unexpected costs, and frees up dollars to invest in more productive capital improvements and human resources. Yet, Canada could be much more competitive. In the latest international ranking, Canadian industry uses more energy to produce a unit of GDP than the US, and other competitors such as the UK, France, Mexico, and South Korea.   Another reason to boost efficiency is because it frees up the amount of energy Canada can export and – critically – the net value captured from those exports. A recent Canadian Efficiency Potential Study showed that if the oil and gas sector booms, efficiency can significantly reduce the added energy demands for domestic fossil fuel production. This increases Canada’s net fossil fuel trade balance as fewer energy inputs are used to produce the same output. The result is reduced domestic energy demand and a one trillion ($US) dollars in additional fossil fuel trade revenues by 2050.   Efficiency improvements also produce numerous co-benefits that can boost labour productivity and domestic sales. Better ventilated and designed buildings increase employee satisfaction and reduce sick days. Better lighting can increase worker safety and increase retail sales by making products look better. These economic benefits can be much greater than the saved energy.   Improving efficiency creates jobs throughout the country, in sectors like construction vulnerable to economic booms and busts. It also puts more money in the pockets of consumers, which strengthens domestic demand. Our comprehensive economic modelling shows that meeting the energy efficiency objectives outlined in the Pan-Canadian Framework would create 118,000 annual jobs. A recent study in the US shows that energy efficiency accounts for half of that country’s entire energy industry’s job growth.   Finally, there is an opportunity to grow Canadian clean technology companies with specializations in areas such as integrated building design, data analytics (e.g. EnergyX), and smart devices (e.g. Ecobee) to sell to a large global energy efficiency market. The global investment in energy efficiency was US$236 billion in 2017, and it is growing while most other energy sectors are experiencing downwards investment.   It is for all these reasons that doubling and then tripling Canada’s energy productivity is a key plank in the vision for a low-carbon future outlined by the government’s recent Generation Energy Report. Yet energy efficiency still gets less attention than policies like carbon pricing in climate policy discussions. Maybe, Minister Morneau’s search for targeted measures to increase competitiveness will put a renewed focus on the importance of energy efficiency?