We need a national retrofit code sooner, rather than later

A building code for existing buildings by…2030?

Action on Canada’s retrofit code, known as the Alterations to Existing Buildings (AEB), kicked off again in late August with the first meeting of the reconvened Joint Task Group (JTG-AEB). This task group brought together members of both the Canadian Commission on Building and Fire Codes (CCBFC) and Provincial/Territorial Policy Advisory Committee on Codes (PTPACC).

While the bulk of the meeting dealt with the polices and procedures that would guide the task group’s activities through the development of the AEB, one inescapable note tucked within the agenda was the expected delivery date of the national retrofit code in 2030.

This timeline is markedly different than the one put forward in the 2016 Pan-Canadian Framework on Clean Growth and Climate Change (PCF) in which federal, provincial, and territorial governments committed, “to develop a model code for existing buildings by 2022, with the goal that provinces and territories adopt the code.” 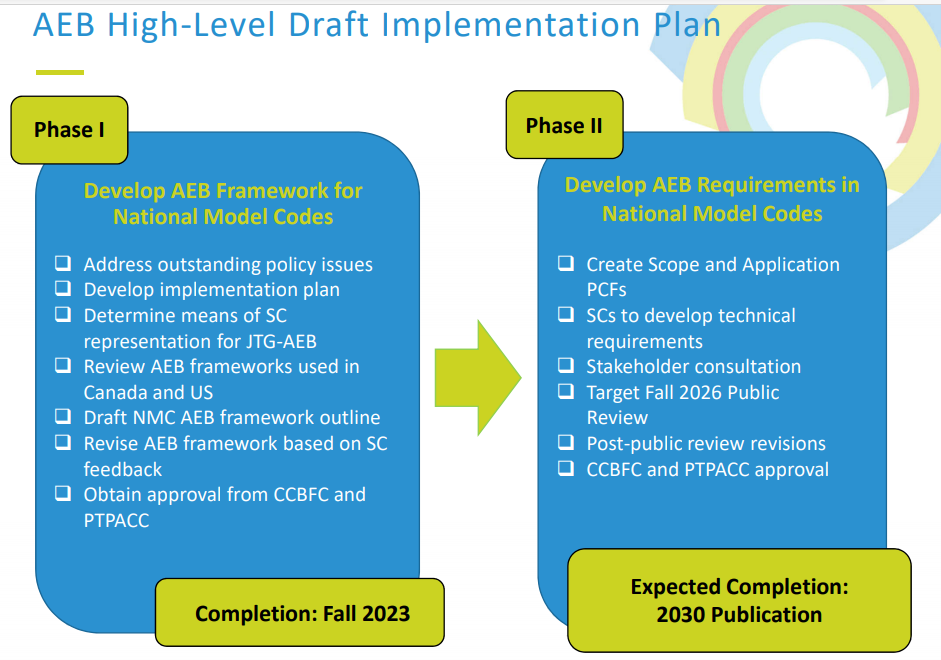 PCF timelines should not be left to interpretation

The CCBFC is an arms-length, volunteer body and, while informed by the priorities of the federal government, it is not accountable to the federal government. As such, the JTG-AEB sees itself as developing the AEB report in parallel with the PCF, but not bound by it. Thus, the task group has put aside any reference to the PCFs 2022 timeline and interpreted its role in carrying out the federal government’s PCF commitments as extending only to developing, “a model code for existing buildings to help guide energy efficiency improvements during renovations, with the goal that all provinces and territories adopt it.”

Too important to allow ambiguity

The climate emergency we are in demands swift and bold actions, not to mention leadership. And, in the absence of federal direction, the national model code development system has chosen a path misaligned with the federal government’s own stated climate objectives, as well as its international climate commitments.

Buildings are expected to play a primary role in achieving climate neutrality and the development a retrofit code, alongside a stringent model code for new buildings, has been identified as key to reaching climate neutrality in our built environment. Reaching the deep energy and emissions reductions needed in our built environment demands the federal government step up and aligns our national model codes with federal climate commitments.

What are the consequences of delay?

Provinces and territories have stated that the harmonization of regulations across provincial and territorial borders is a key priority, including building codes. Nonetheless, with a delivery date of 2030 for the AEB, municipalities and provinces will be forced to disrupt these harmonization efforts as they forge ahead with their own strategies for immediately addressing energy use and emissions from buildings.

Already, provinces and municipalities are developing and implementing their own retrofit codes, pursuing construction standards that help them bridge the divide between the lack of stringent requirements guiding alterations to existing buildings and their jurisdictions’ ambitions, or exploring international best practice in implementing MEPS.

And while these sub-national efforts are gaining traction, our national model codes system will have a limited role in meeting the federal government’s more ambitious 2030 climate target.

The timeline for the delivery of a building code for existing buildings in 2030 further highlights the disconnect between building codes development and the federal government’s climate targets, namely our goal to achieve net-zero emissions by 2050.

It’s time for the federal government to eliminate this disconnect, and leverage Canada’s model codes development as a policy lever by which to deliver climate neutral buildings for all Canadians.